Leading lighting company ELC Lighting, developer and manufacturer of Green-Go has announced its move into new headquarters in the Netherlands. The new, improved offices, based in Gemert near Eindhoven, have been designed and planned by the company’s own R&D engineers and promise to be a space created with the comfort of the worker in mind.

This is the first time that ELC Lighting has operated out of its own building , having spent the last fifteen years in rented commercial premises. Silvio Cibien, ELC’s sales manager, said: “Moving into our own walls is a very exciting step for us. We’re not relocating to an existing building which has been adapted to suit our needs , but have designed our new building from the ground up. Everything is tailored to perfectly suit the needs of the company and the workers within it – yes, work is important but we also wanted it to be a place where every member of the team feels able to think, live and even play.”

In addition to the enhanced facilities the building will offer its employees, it also gives ELC Lighting and Green-Go the capacity to increase production and create more jobs.Joost van Eenbergen, owner and head of R&D explained: “We are now in a position to consider recruiting two more engineers, and we have room in the production space for six more workbenches, which give us theflexibility to jump from the production of one product to another small series. ”

The building, which will be used for research, development and production, also houses a large space for seminars and client meetings. And as you might expect from a building planned by the company’s own engineers, the entire space has been kitted out with some very high tech equipment. “We have laid over 4500m of cat5e network cable, installed an ESD protected floor and have a specially dedicated room for our fully automated pick and place machine manufactured by Essemtec in Switzerland, with laser and vision centering, which has a capacity of 10,000 components an hour.” “This move should also enhance our customers’ experience and allow us to continue to provide excellent service and maintain our reputation for short delivery times as we continue to grow,” concluded Joost. 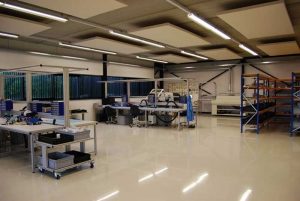